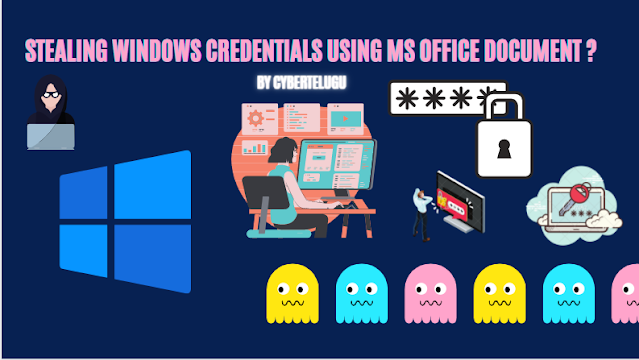 Hello Guys. Today you will locate some factor awesome in this article related to a presently launched script acknowledged as “WORD STEAL”, which can extra and greater outline your hacking skills. Brought to you by using the capability of CyberTelugu official. This script will create a POC that will steal NTLM hashes from some distance flung computer.
Microsoft Word can consist of photos from faraway locations.  This is an undocumented feature, however malware creators decided that it used to be being used to add pictures via http to get statistics.  We can moreover enable a long way off archives on the SMB server and the sufferer will authenticate the usage of their credentials.  This is very really helpful for the period of protests due to the truth it approves you to steal credentials without triggering any alerts, and most protection functions do now no longer work this.
First, we choose to download it from Github, open a terminal in Kali Linux and enter the following command.

Now open the downloaded phrase steal folder the place you will get the “main.py” python script and furnish all permissions to the main.py script if needed.

As the admin described, this script will convert an image or say .jpg to .rtf (Microsoft Word file).  The Rich Text Format is a proprietary posted specification file file plan developed by means of Microsoft for cross-platform document alternate with Microsoft products.  …
After that, down load the picture and retailer it in the Wordsteal folder, on the grounds that I presently have a “1.jpg” image, we want to enter the following command which generates an .rtf file that steals NTLM hashes from the far off computer.

The above command will generate a .rtf file as you can see in this screenshot after sending the 1.rtf file to some distance off the computer.
When the sufferer opens 1.rtf (like a Microsoft Word file) on their system, on the different hand, the assault will attain NTLM hashes.
Inside Word Steal, we have stolen credentials barring triggering any alerts, which you can have a seem at in the following image.  Now use john the ripper password cracking system to crack the hashes in the netntlmv2 password file, or enter the following command:

Cool!  We can see the victim’s credentials that can be used to log in.

THIS METHOD IS ONLY FOR EDUCATIONAL PURPOSE

DON’T MISUSE IT GUYS
😍
THANKS FOR READING

In 2021, the evony Hacks will come around your world. It’s a year that will be remembered for…
0 Shares
0
0

Looking for best Showbox alternatives for android in 2020, then here is a curated list of best apps…
0 Shares
0
0

Zip is one of the most popular file formats for compressing files and folders. By compressing your files…
0 Shares
0
0